Aconcagua is, generally, a good weather mountain. However snow storms and strong winds should be expected anytime. The official Aconcagua climbing season is from November 15th to March 15th.  We run our expeditions during December, January and February. Ends of November and December firsts are always a little colder and days are shorter and wind blows more at the end of February. But as I told, you must be ready for a storm at anytime. We have experienced heavy snow storm in mid January but usually the sun shines most of the summer and wind is not danger in normal conditions.

Temperatures are very different during the day or the night. As a guideline  can say temperatures are approx.
Approach (Confluencia): Night 0ºC; Day 20 to 30ºC
Base camp (Plaza de Mulas): Night -10ºC; Day 10 to 20ºC

Be aware that Aconcagua is a windy mountain and chill factor should be considered.

The Central Argentina Andes and particularly the Aconcagua, they receive the humid winds from the anticyclone centers in the Pacific Ocean. The climatic phenomenon named Zonda wind has a similar explanation as to the Foehn wind in Europe.The Pacific anticyclone sends humid winds toward the East, so the Andes receive them from the West. When these humid winds reach the mountains, they go up decreasing their temperature and generating snow. Posteriorly these dry masses of air go down the oriental (east) side of the Andes, increasing their temperature.

This movement of air from the Pacific Ocean is the first cause of wind and snow storms at Aconcagua. Also there are some scaring electrical storms during the summer. It is important not to underestimate them. The summit, the ridges and all the Northwest face of the mountain are exposed and the South Wall is less exposed.

There is a particular phenomenon in this mountain, because if its relative big dimension. Sometimes it blows a high altitude strong wind from the west, that affects the highest part of the mountain (more than 5.500 meters over the sea level), forming a huge cloud mushroom shape  constituted of micro crystals of ice.

Even with good weather in Plaza de Mulas, the presence of the mushroom is a signal of strong wind and snow in high altitude. To get inside this mushroom can be very dangerous. It is imperative to abandon the superior sector of the mountain when its imminent formation is detected.

About temperature, even in good weather it is common to register –20º C above 5.000 meters. In the summit it is frequently registered a temperature of –30º C. During bad weather or in a presence of air masses coming from the South, the temperature in Plaza de Mulas can be as low as –18 º C and below –25 º C in the upper sector of this mountain.

During winter, the area is covered with snow. Winds are violent and permanent. Temperature is rarely above 0º C. Climbing the Aconcagua in winter is a hard psychophysics experience. It requires important experience and high quality equipment.If the “early season climbs” present some problems, let me tell you that it will depend on how the last winter was in Mendoza.

Aconcagua Park is open from November 15th. Usually, at this time of the year you can find snow on the valleys going up to the base camps. That´s the reason because of could happen that the mules will take more time to find the way up and due to this the Base camp’s services will be not fully operating yet.

Another important point to note is that the base camp Plaza de Mulas, by the normal route, it’s working before that the Plaza Argentina base camp.
Also you have to bear in mind that the beginning and end of summer will be always colder than  middle of January, but as I told you before snow storms and strong winds should be expected anytime in Aconcagua. 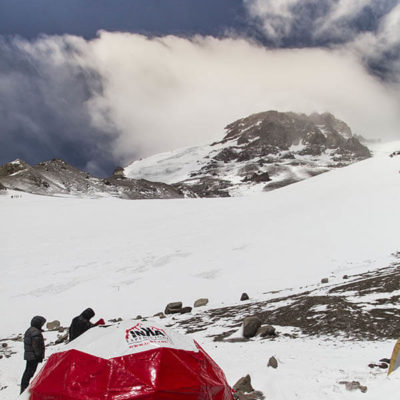 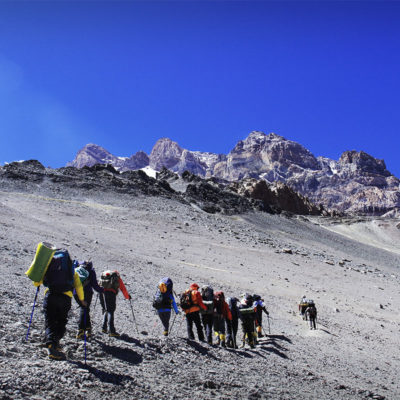